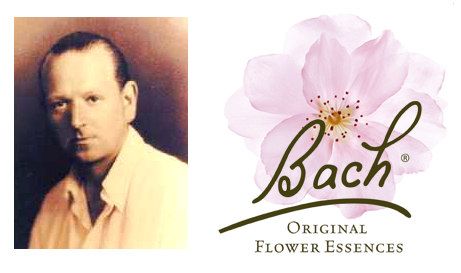 he observed that people were of a number of different types, according to their out­look on life and personality (just as in homeopathy we have the great constitutional polycrests such as Pulsatilla, Nux vomica and others).

he developed his intuitive sensitivity to the point where he was able to experience an emotional state, and then find the support from nature (in the form of an essence from the appropriate flower) that resolved this state.

he developed a method of transferring the energy from the trees and flowers that he found helpful to water, which he then preserved with brandy, and so was able to dispense remedies from this source.

In London, Cromer and finally settled for the last years of his life near Wallingford in Oxfordshire. His work was carried on after his death first by Norah Weeks and Victor Bullen, and then by others from the Bach Centre at his house, Mount Vernon in Sotwell.

Gradually people around Britain and then the world became intrigued by the benefits of his “drops”.

Therefore Bach Flower Remedies are powerful yet gentle healing tools that can catalyse the resolution of deep emotional imbalances, as can homeopathy.

Where they differ from homeopathy is.

That being a complete system of only 38 remedies and one combination there is far less choice than faces the homeopath, even for an acute prescription.

There seems to be no possibility of a “proving” – that is an adverse effect of creating the medicine picture in a patient by taking a homeopathic medicine day in day out for a period of time.

Bach remedies are not potentiated sequentially by succession, merely by the sun or by boiling, and then a one step dilution to stock essence, and one further to treatment bottle.

Aggravations can occur, but they are rare and short-lived.

Bach remedies do not appear to have direct effects on the physical body or physical symptoms, as can homeopathy. Instead, they work through the “metals and emotional” – the more subtle aspects of a remedy picture.